Johan Bruyneel knows how to win. concrete foundation contractor . hawaii foundation repair . As a coach and team manager, he’s been a part of 9 Tour de France victories—7 with the man he calls a “brother”, Lance Armstrong, and 2 with Alberto Contador. So when Bruyneel gave the keynote address recently at USA Triathlon’s International Art and Science of Coaching Symposium, it seemed everyone was listening. And Bruyneel didn’t disappoint.

Here are the ingredients for winning that Bruyneel shared with the crowd:

2. Be open and willing to learn.
3. Always be creating.
4. Surround yourself with the right talent.
5. Communicate and confide.
6. Give ownership, acknowledge, and encourage.
7. Manage people, not tasks.
8. Constantly evaluate and be innovative.
9. Learn from losing.
10. Believe.

Endurance Planet got the opportunity to speak with Bruyneel following his address. He was candid and forthcoming about a number of issues.

It was no secret that the Astana team Bruyneel managed in 2009 was rife with conflicts. Alberto Contador was the defending Tour champion but Lance Armstrong was welcomed on the team. Harsh words were exchanged between Contador and Armstrong about each rider’s definition of “team.” Both Bruyneel and Armstrong believed that Contador put his own ambitions first. When Contador broke away from his team late in the Tour—an unnecessary move considering he was in control and heading for another Tour win —the conflict escalated.

“I was very angry,” admits Bruyneel.

Now Bruyneel is leading Team RadioShack with Armstrong at the helm of the riders. Asked whether vengeance can fuel a successful Tour de France, Bruyneel stated, “Motivation will not be a problem.”

Lance and the Ironman

Bruyneel also shared that rumors about Armstrong’s desire to compete in an Ironman are more than rumors.

“Probably in 2011,” said Bruyneel, “depending on how the Tour goes.”
He suspects that Armstrong will compete in some “lower level cycling races” in 2011, followed by “an Ironman.” Which Ironman has yet to be determined.

Bruyneel wasn’t certain if Armstrong could win an Ironman but offered, “He’s gonna want to be good…He’s definitely going to go for top five.”

He went on to explain that Armstrong’s venture in marathoning was half-hearted. It was just something to do for fun. Not so for triathlon. Bruyneel says Armstrong will give everything he has to succeed at the Ironman distance and train seriously for the event.

A Tour de France victory in 2010 and an Ironman win in 2011? Endurance sports fans will anxiously be watching. 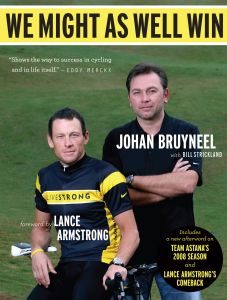