Dr. Tim Noakes and Dr. Phil Maffetone: Guide to Hydration and Electrolytes, Hyponatremia Prevention, and Why Health Matters Above All

Dr. Tim Noakes and Dr. Phil Maffetone have followed each other and supported one another’s careers for decades, but they’ve never actually met. Until now. Endurance Planet brings these two brilliant men together for the first time in history, making for an instant classic podcast!

LifeBEAM makes the world’s most advanced wearable instruments for measuring human performance. No need for a chest strap, your heart rate monitor is embedded into the Smart Helmet, Smart Hat and Smart Visor. And they’re compatible with both ANT+ and Bluetooth low energy! Use the code “endurance15planet” for 15% off.

Also be sure to check out our Shop page to save and get your hands on the products and services we trust and use ourselves. When you shop through the podcast you support the show! And open our Amazon banner! 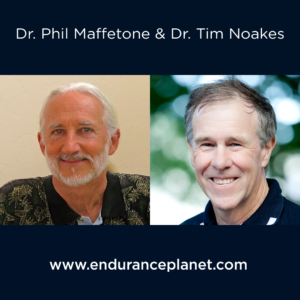 Part 1) – INTRODUCTIONS
The first half hour is spent getting to know more about Phil and Tim, and how their careers and philosophies have been so synergistic over the years. You’ll learn how they first came to know about one another (hint: Ironman, Mark Allen and Paula Newby Fraser), how they’ve influenced each other, their “unconventional” approaches to coaching and diet, and how they deal with presenting opinions that are often controversial compared with mainstream sports science.

Past episodes with Maffetone on EP.
Maffetone’s Books:
-The Endurance Handbook
-The Big Book of Training and Racing
–Article on Johnny Cash and the guitar

Part 2) – HYDRATION DONE RIGHT
Starting at about 35 minutes we jump into the main topic for the show: a full in-depth guide to teach all athletes how to properly hydrate in any training or race conditions, especially the long endurance events, as well as how fueling and fat-adaptation fits in. The ideas are not what you typically hear in mainstream sports science, but they’re ones that will keep you healthy, aid better performance and even serve to save your life and longevity.

-Definition of hyponatremia and its risks for endurance athletes.

-Why we don’t need more water/fluids nor electrolytes and how our body has buffering mechanisms for sodium and that those mechanisms correct any sodium imbalances….

-…However, health status can alter sodium regulation putting one at risk.

-The role of health and hormonal balance in regulating hydration and sodium/electrolytes, and the role of the HPA axis in this. When hormones are in imbalanced state, and HPA axis no functioning properly, how is one at higher risk for hydration-related issues during a race?

-What is ADH, its role and the “syndrome of inappropriate secretion of the antidiuretic hormone (ADH).”

-Do we have a predisposition to develop hyponatremia due to health? What can we do to prevent hydration and electrolyte problems?

-The “myth” that dehydration and weight loss is bad.

-An argument against the traditional idea that a loss of body mass of more than 2% is detrimental to performance (this is often stated as a benchmark in sports science).

-How weight loss is actually ok and even beneficial since it lightens the load that must be carried.

-What does this mean when one gains weight during a race and is it more dangerous than losing weight in a race?

-How do you avoid overdrinking if you’re ridiculously thirsty – including at very hot races — especially when the athlete just wants plain water?

-WHy taking more electrolytes if you’re drinking more than average water/fluids is NOT safe and does no extra good in the prevention of hyponatremia.

-Learning to drink to thirst and intuitively – the brain knows what it wants so listen to it!

-However, how do we know when to trust our thirst sensation (brain) to drink intuitively vs. needing to turn off those desires kind of like overriding central governor?

-More on central governor and “overriding” it to perform well (but safe) in a race.

-Challenging the “sweat sodium loss” test. New-age sports scientists who say it’s simply a matter of measuring one’s individual sweat sodium loss to develop their own unique hydration and electrolyte needs? These days these services are more widely available to athletes in labs everywhere and custom hydration plans are being written. We’ll tackle this concept.

-Case Study/Question from an elite ultrarunner:
“My question is regarding sodium replenishment during exercise. Recently, I got sweat sodium analysis done at a lab. The results showed that I lose around 1400mg of sodium per liter of sweat. The idea is that you replenish a percentage of that loss with the water that you drink. In my case, the recommendation was 1200mg of sodium in liter of water consumed. Having had success with this strategy in training, I tried it out at a 100 miler (bighorn 100) is past June. The race starts on a Friday and this year it was very hot. In the past, on hot days I usually end up having to deal with cramps. The cramping starts early so I feel like it’s not related to fatigue. Last year at the same event, I started cramping around mile 13!!! Anyways, long story short, this was the first hot ultra running event where I didn’t have any cramping issues at all. I’ve also been able to repeat the results in subsequent running events. Also, in the past, during runs my clothes would get super salty. But now, even with the higher sodium intake, I don’t find huge salt stains on my clothes. What are Dr. Noake’s and Dr. Maffatone’s thoughts on this? I’m familiar with Dr. Noakes’ views on sodium supplementation but do anecdotal stories like mine (and many others from what I hear) warrant another look at sodium supplementation during exercise?”

-Is it possible that the combination of high sweat sodium concentration and high sweat rate (and a hot day), might overwhelm mechanisms that balance sodium requiring sodium supplementation along with water ingested?

-Also, when it comes to cramping, is the problem not so much about dehydration but instead re-hydration without adequate sodium and overwhelmed sodium buffering mechanisms?

-The real deal on our sodium needs and why low sodium/no sodium diets are a dangerous, bad idea.

-Tangent: High sodium is NOT the cause of hypertension, but sugar is; and the risks of meds to fight high blood pressure.

-The role of weather and altitude and hydration/sodium and fluid needs? In particular: what about the really hot and/or humid endurance events: IM Kona, IMAZ, Badwater, WS100, etc?

-The sad news of a 30-year-old male athlete who died at the finish line of Ironman Frankfurt this year in abnormally hot conditions, and reports that said he had swelling of the brain (indicating hyponatremia). Tim and Phil challenge news reports on this that said, “he didn’t consume enough minerals during the race” and “the athlete drank mostly water during the race and did not take in enough minerals. The human body requires extra salt and minerals when working hard in very hot conditions.”

-Fueling strategies. Maffetone and Noakes are both in the “high fat” camp and promote avoiding high carbs and poor quality carbs. How does one’s fueling before or during a race play any role on their sodium and hydration status or hydration needs?

-How Noakes saved his own life going LCHF and keto, as well as overdcoming Type II Diabetes.

-Lessons from Noakes and Maffetone who’s been there and done it all, and want to teach you the tools to be healthy and perform well for a lifetime!