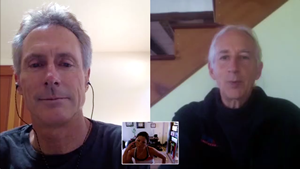 Endurance Planet makes history by bringing together two legends for their first-ever dual interview: six-time Ironman World Champion Mark Allen and Dr. Phil Maffetone, who was Mark’s coach that led him to the ultimate success in long-course triathlon racing.

Specifically we dig into:

Part 1: Mark & Phil’s History and Using MAF!
-How Mark and Phil met
-Mark’s first-ever MAF Test and the shocking news of having to run slow to get fast
-The dynamic between Mark and Phil, and their coaching relationship, trust in the plan, etc
-How long it took for Mark to see results in racing
-MAF HR on run vs. bike
-Mark’s first Kona win in ’89 and his 2:40:04 run — what was different that year?
-How long it took for Phil’s approach to click in Mark
-How they maintained Mark’s health and life balance allowing for years of racing success

Part 2: The Current State of Ironman Racing – Is It Healthy?
-Do Mark and Phil think that current athletes/pro over-racing with negative health impacts?
-How the current system contributes to over-racing
-Why and how things need to change to take care of athletes for present and future health
-Athletes need to play a role in making changes
-and more

Part 3: Modern Coaching
-Mark on coaching Tim O’Donnell on Angela Naeth
-Phil on advising current pro athletes (including Naeth)
-How they coach and prevent athletes from going down a path toward negative health
-The dynamics of how they coach together
-What goes into successful coaching — and what kind of “coaching” to avoid!
-Coaching for athletic success
-How to find a great coach
-and more