ATC 295: Split Long Runs – Why and When Are They A Good Idea, Plus: Hamstring Healing, Bailing on Interval Workouts, and More

You hear us talk about
UCAN all the time. Many of our athletes and listeners swear by it. How about you? Maybe you’re ready to try UCAN but don’t know where to start? We have the perfect solution: Click here to get 50% off your UCAN Tri Starter pack. The Tri Starter Pack includes a sample of all the best UCAN products for just $17.50, normally $35. This deal is exclusive to our EP audience and not offered to the general public. It won’t last forever so take advantage while it’s here!

Split Long runs – pros, cons and the why?

Hello! I was hoping you could speak a little to the theory of breaking up long runs for marathoners and ultrarunners. Here’s some context: I am training for a couple of 50 milers this year and hopefully building toward a 100 miler the year after and have heard a few interviews with Camille Herron and some other ultra runners. In those interviews they talked about breaking up a long run in to morning and afternoon sessions, and how for them, they contribute it to their success and lack of injury in the sport. I am curious about a couple of things:

(1b) As far as training load goes, does a split run compare to a full long run? Is there any evidence that one is “better” or more efficient than another?

I’ve been battling an ongoing hamstring issue the past year (finally doing some PT to help strengthen and learn to fire the glutes more), and was wondering if this approach may help in that process by splitting up stress of a long run on my hamstring in to smaller segments. I would like to perhaps experiment with a split long run here or there, but was curious as to your take on its effectiveness. I have a little bit of an issue convincing my ego that 24 miles is the same as a 16 + 8 mile in terms of what I would get out of it in terms of ultra training, but at the same time I don’t want to reject it completely because I am too “proud” to split up runs (and not see those longer runs appear on my Garmin…psychologically for me its a confidence booster going into an ultra) when in reality it may be more beneficial down the road. Help?

Sending much love out to all that you do. I’ve been listening since the original guy started podcasting this show. I’ve missed very few episodes since then. I appreciate Lucho’s and your thoughtful answering of the variety of questions you receive and also just your conversations with each other. I can’t begin to tell you how much education y’all have provided.

I’ve had a million questions or requests for points of clarification over the years but this is my first time writing in with any of them. Fortunately most of the questions were eventually answered or they were forgotten! Feel free to choose all, some, or none of these to answer!

First my background (only if you need it for the question(s):

Triathlon for more than a decade

Have probably overemphasized zone 2 and MAF training at the expense of high end speed. (Not probably, most certainly!)

The Questions that i have not heard answers for:

There have been previous questions about marathon pace, training pace, etc. How would you determine what your “race pace” and your “training pace” should be when training for something like the run on an Ironman or 70.3? Is there a resource or table or calculator or something to put someone in the ballpark? With training, would you emphasize HR or perceived effort instead of actual pace?

I’ve heard you talk about pulling the plug on a run interval/track workout when you stopped hitting target times. Are there benefits (such as mental toughness) for continuing the workout even when you miss your pace? And how does this apply to a swim workout? Shouldn’t you finish the swim anyway? (Back in my competitive swimming days, if we missed the interval we just stopped getting rest but had to keep going until we finished the set.)

During a longer run my range of motion gradually declines. (God help me if my shoes become untied!) Would it be smart to stretch and/or do dynamic movements? It seems like stretching is not the way to go but maybe something like butt kicks and knee slaps would. Would that improve or revive the run? 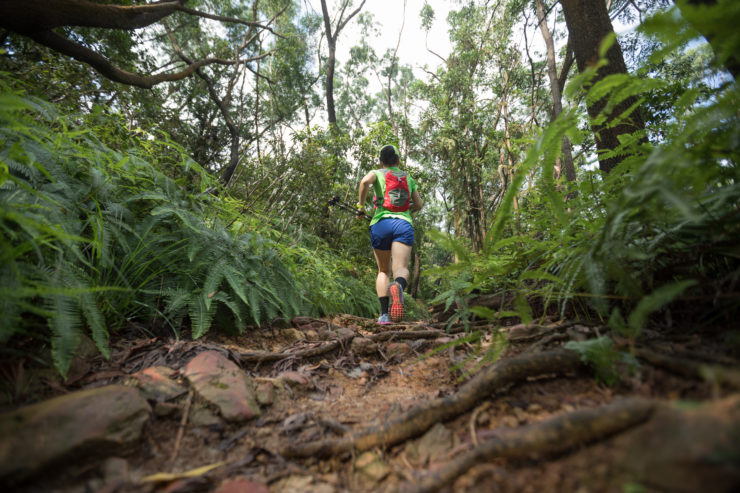