ATC: Jack Daniels’ New Athlete, Get a Stronger Open Water Swim, Swollen Fingers During a Race, How Long to Be Considered Ultra, and Are Your HR Zones Off?

September 19, 2014
This episode is brought to you by: Squatty Potty which you can learn about at enduranceplanet.com/squattypotty.
Use the code enduranceplanet for 10% off your order!
Squatty Potties make great gifts (hint hint). 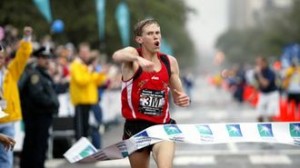 On this ATC, Lucho and Tawnee discuss runner Ryan Hall partnering up with a new coach, the legendary Jack Daniels, 81.

Then the coaches answer your questions on:

Doing a 50 mile ultra 3-4 months after one’s first ironman — is this a good or bad idea and why?

Re-assessing HR zones (especially if they don’t “feel” right). Numbers based on LT/VO2max tested in a lab but HR zones seem off and hard to hit.

Is it more efficient to do some longer zone 3/tempo workouts for a half marathon race than easier runs and/or intervals?

Thinking about signing up for Escape from Alcatraz, but weak in the swim. How strong of a swimmer would I need to become to sign up for that race? And what can be done to get strong for a gnarly swim?!

How early should you travel to a race at altitude to acclimatize (in this case Leadville 100 MTB) especially if you don’t live in altitude? Get there a night before? A week before? Two weeks before? What does science and anecdotal evidence indicate works best for racing at altitude?

New event in the UK called the Isoman, which has worked out a supposedly “equal” ironman using current world records: a 7mile swim, a 61.3mile bike and a marathon. How would you train for this event?

Endurance athlete who wants to be speedy at sprint triathlons but also have the endurance to do trail ultras — how do you train to get the best of both worlds?

Approaching a block of marathons and a 50k all taking place within three months — how to recover between races; how pace each race; and how much rest after it all in prep for next season?

What does it mean when hands and fingers swell during and after an endurance race such as Ironman in the heat? Is it an electrolyte and/or hydration issue?

How far do you have to go to be considered an ultra athlete? Is there standards or is it totally subjective? Lucho and Tawnee get philosophical and think deeply on this one…