March 6, 2015
Shop with Endurance Planet’s Favorites! You can benefit from Endurance Planet’s handpicked sponsors and affiliates by using special discounts and offers to enhance your training and health at enduranceplanet.com/shop 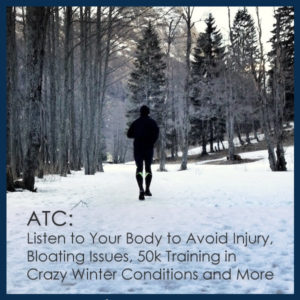 On this episode Lucho and Tawnee spend some time catching up and chatting and answer the following questions:

D: Master’s athlete overcoming lots of injuries and still wanting to train for Ironman
I had a very successful Ironman Arizona in 2013. January of 2014 tore left quadriceps muscle. Continued swimming and cycling and started running again at the end of February. Had to start very slowly and was only up to 6 miles by April. Walked / jogged Boston in April. Early June tore right medial meniscus. In August had meniscectomy. Continued having significant problems, had repeat MRI which showed recurrent tear so had second meniscectomy in December. I have been able to again swim and bike as well as XC ski. With 40 years of endurance I am able to go long, and recently completed a 51k XC ski race. However, with lack of conditioning I was not able to “race.” I am hoping to be able to start running in the next several weeks. Have not run since June. My question: with this back ground what will be the best way to start and get back into running shape for IM Chattanooga in September and at the same time avoid suffering a new injury. I have been looking at MAF as a way to build more endurance and base. I have LT info from biking that I could use to go with zones.

G: Annoying bloating as a result of trianing even on an empty stomach – why?
I often find that if I participate in training sessions longer than an hour, I get a terrible bloat. These sessions are not high intensity in nature, but I often feel ‘plump’ if they do last longer than 60 mins. This feeling lasts up until lunchtime. Any idea how to reduce this swollen feeling? Bear in mind, i train AMs, and within 30 mins of waking up. I don’t really ever take any pre-training nutrition (as i feel i have enough glycogen reserves). Could this be contributing to it?

G: How important is it to eat right after a workout?
I often don’t have an appetite after training. So sometimes I skip breakfast, and then just have lunch. I start feeling hungry perhaps 2-3 hours after a session. Am I harming myself by not talking that magic 4:1 post recovery nutrition? And when you’re trying to adopt a lower carb lifestyle – what is the best post nutrition item to intake?

I: Freezing winter but needing to train for a 50k – help!
I’m targeting a 50km trail race on May 23. Elevation gain appears to be around 3,500 feet for the 50km. This would be my first 50km race. It’s currently freezing cold in Ontario and my running (outdoors!) has been limited to an average of 3.5hrs per week with an average weekly distance around 30km. My hope is to be able to increase my training time to 5-6hrs per week during March and hopefully 7-8hrs per week for April-May. It is unlikely that I will have more than 8hrs per week of training during the year. What would be the best way to structure my March-April training? What makes sense in terms of a combination of MAF, intervals, and hills? I don’t have access to a treadmill, so my running always happens outside. I do have access to a pool, but I haven’t used it this year so far. My goal is to finish the 50km below 6hrs, which seems very reasonable to me given that the race is so early in the season. Your help is appreciated.

Plus chat on eccentric strength training to benefit runners’ crosstraining.