Shoutout to our loyal fans who’ve donated to the Week of Kona coverage.
There’s still time to donate! 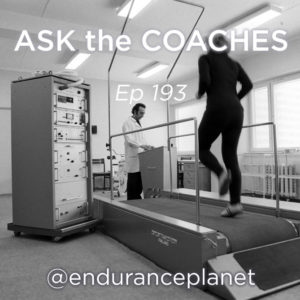 On this show we discuss a couple new studies just released in the NSCA’s Journal of Strength and Conditioning:

“The Effect of Rocktape on Rating of Perceived Exertion and Cycling Efficiency”
-18 recreational cyclists
-4 conditions: 60% vo2max with RT; 60% VO2max no RT; 80% vo2max with RT; 80% VO2max no RT
-During the RT conditions, investigators applied RT to the anterior arms and legs, and posterior neck and back
-Overall RPE, leg, arm, and chest RPEs were obtained (RPE-O, RPE-L, RPE-A, and RPE-C, respectively).
-Gross cycling efficiency was determined by calculating the ratio of the amount of work performed to the energy expended.
-5.9% lower overall RPE with the tape
-The use of RT did not increase gross efficiency
-The main finding in this study was that subjects reported a lower level of exertion overall and at the chest, which may lead to increases in overall performance of these athletes. The use of RT before athletic events should not be discouraged.
-It could be plausible that tactile input on the back for the RT creates an awareness of the thorax position, improving form and allowing for better diaphragm expansion and contraction, thus explaining the RPE-C vs. RPE-A or RPE-L. For RPE-L and RPE-A, no differences were found with the application of the tape. The increased proprioception from tape is thought to help increase range of motion and optimally align joints.

“Predicting marathon time using exhaustive graded exercise test in marathon runners”
-40 marathon runners 2012-2013
-significant correlation between graded exercise treadmill time and marathon performance time
-formula: y = -3.85x + 351.57 (y= MPT; x = treadmill time)
-sex, weekly running duration, experience, age, etc did not correlate with MPT
-how this helps? possibly a cheaper and easier way to predict than other tests/lab stuff
-Noakes said in 90s the best predictor was combining lab measures of LT and peak running velocity + previous race times (half mary)
-This study used the Bruce protocol, modified – graded exercise test to voluntary exhaustion
-During the protocol, two minutes into each stage HR & RPE were recorded.
-The protocol included a 5’ warm up at 4% incline and 4 km/h (2.5mph) followed by stepwise progression every 3 minutes as seen below in Table 2. Each participant was asked to continue as far into the treadmill protocol as they could. Once they reached voluntary exhaustion the treadmill test was terminated and total time, maximum heart rate and average heart rate were recorded.
-More on the Bruce Protocol
-did the treadmill test 2 weeks prior to the marathon

Discussing Lucho-isms:
“Things I write to athletes: MAF (and any training theory) is based on stress. You have to stress your body in order for it to strengthen. If you do just MAF for an extended period of time then you have to use volume to do this. An athlete doing 5-6 hours a week at just MAF will eventually plateau. At that point you either increase intensity or volume. With cycling in particular you’ll need lots of volume. In my own MAF periods when I was racing Ironman my bike weeks would hit 35 hours. That’s JUST the bike.
So if you take on strictly MAF focused training you have to consider that you’ll have to increase volume as your body adapts. I can’t tell you how quickly your body will adapt or how fast you’ll end up. I believe that athletes have to simply do the work. Do their best in training and on race day. If they then make few mistakes then the race results are not within your control. They’re nothing more than a product of your previous work and race day execution. If you could choose all these things, like how quickly you gain fitness or what time you hit on race day, then it would all be simple! You could just pick a winning time. But instead you have to do the work, day in and day out until you reach the point that it’s possible.
So. Can you qualify for 70.3 Worlds doing just MAF? Sure! If you do the appropriate amount of work (volume) day in and day out. When will that happen? No way to predict that.
The amount of volume your body can handle isn’t my choice or even your choice. It’s your body’s. It will decide when enough is enough and it will tell you in no uncertain terms when you reach that point. You just have to listen to it. I’ve talked often that athletes tend to predetermine their training mileages and then ignore their body’s signals that they need to rest just to hit those numbers. That is wrong on every level. We can’t just choose an end result with weekly mileage and expect it to be correct.”

And answers to YOUR questions:
-Follow up on our last podcast and letting your race choose you: Damien asks, Shouldn’t that be true for the distance too? What about Tawnee going from marathon to ultra?
-Training for a 24hr and trying to figure out a training plan for it, including two-a-days, long runs, etc. Lucho gives his advice and some concrete numbers.
-Recently adopted MAF training , now doing Maffetone’s 2 Week Test, and it has been rough! Feeling like crap and running even slower. Is this normal? Carry on and stick it out?
-Transitioning from just triathlon training to ultra training as well. How to balance the three sports with an added emphasis on running if looking to do a 50k run, 100-mile run and 70.3 triathlons int he next year?
-Is the 10% rule crap? And an old post from Tawnee on why the 10% rule is outdated.