Both had to battle hard against the field and also against weather conditions, with the opening 1.8km swim leg proving a challenge in a heavy sea before the 62km bike and 12km run.

In the women’s field, Czech Olympian Vodickova  and Granger were neck and neck on the swim and bike courses with Vodickova holding a lead of just 24 seconds as she began the run, a lead she stretched to more than three minutes at the finish line. She won with a swim of 00:16:04; bike of 01:42:10 and run of 00:51:38 for an overall time of 02:52:14. Granger, wife of men’s third-placed Justin Granger, finished six minutes behind her husband in 02:55:30. Phuket-based age grouper Sarah Wheeler of the UK had a magnificent race to finish third woman in 03:16:30 and also win her 35-39 age group.

The inaugural Laguna Lăng Cô – Vietnam Airlines Trithlon saw more than 200 athletes from 28 countries contesting the course in a race which is the sister event of the legendary Laguna Phuket Triathlon, now in its 20th year.

Champion Cigana said: “It was a very beautiful race, a fun swim, very fast scenic bike course and a lovely run through the golf course. I enjoyed it very much and I’ll be happy to be here next year to defend my title – I hope to bring many more Italians to race at Laguna Lăng Cô.”

Vodickova commented: “I loved everything about my first experience to race in Vietnam – the course, the great organisation and all the friendly and enthusiastic people. I came here to be part of this triathlon as I think it will have a long history like Laguna Phuket Triathlon – I am so proud to be the first women’s champion at Laguna Lăng Cô.”

Laguna Lăng Cô is the first and largest world-class integrated resort in Vietnam, and a premium second home destination development in Central Vietnam. The 280-hectare community, which marks the first project in Vietnam for Banyan Tree Group, resides near Lang Co Bay and is framed by a three kilometre beach overlooking the East Sea, an area renowned for its pristine coastline, natural scenery and proximity to UNESCO World Heritage Sites.

Banyan Tree Holdings Limited (“Banyan Tree” or the “Group”) is a leading manager and developer of premium resorts, hotels and spas in the Asia Pacific, with 33 resorts and hotels, 68 spas, 80 retail galleries, and three golf courses. The Group manages and/or has ownership interests in niche resorts and hotels. The resorts each typically has between 50 and 100 rooms and commands room rates at the high end of each property’s particular market.

As a leading operator of spas in Asia, Banyan Tree’s spas are one of the key features in their resorts and hotels. Its retail arm Banyan Tree Gallery complements and reinforce the branding of the resort, hotel and spa operations.

Since the launch of the first Banyan Tree resort, Banyan Tree Phuket, in 1994, Banyan Tree has received over 890 awards and accolades for the resorts, hotels and spas that the Group manages. The Group has also received recognition for its commitment to environmental protection and emphasis on corporate social responsibility.

Click the link below for a PDF of the press release.

Photos from the event: 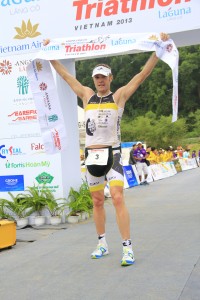 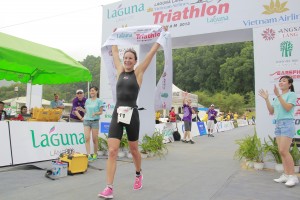 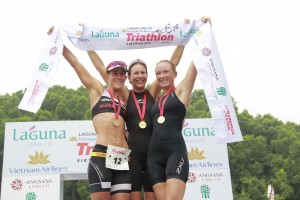 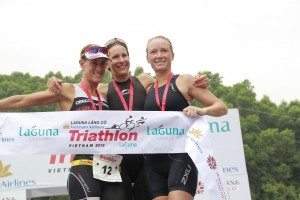 Belinda Granger was second, and Sarah Wheeler in third. 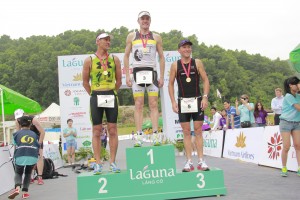 The men’s podium, with Chris McCormack in second and Justin Granger third 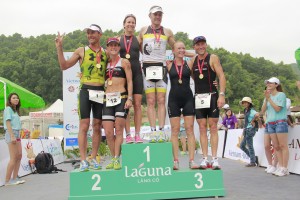