June 22, 2015
Our guest on this show, pro ultrarunner Mike Wardian, uses Inside Tracker for his blood/health testing, and we’re happy to offer our Endurance Planet fans 10% off their Inside Tracker test! To receive your discount email us for the discount code then use that code at checkout when purchasing at insidetracker.com. Plus, check out more deals at enduranceplanet.com/shop – when you shop through the podcast you support the show while also saving on the products and services we recommend! 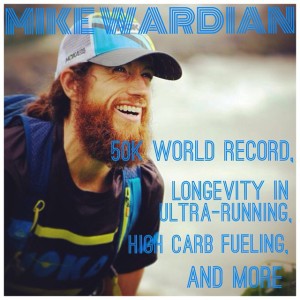 Mike Wardian, 41, started running and competing in triathlons in 1996. Fast forward to 2015 and his accomplishments are nearly too many to list (but scroll down and we’ve added the highlights of his running career). Most recently he broke the 50k record going 2:59:49.

On this show we find out how Mike ticks and go inside his success discussing everything from his choice to be high carb, using blood testing for better health and ideal weekly mileage, to working full-time and being a good dad and father. Find out more at www.mikewardian.com.

-His approach to breaking the WR on a treadmill

-Breaking his own previous records this May

-On raising the bar

-Recovering for this race, and recovering after for the next one(s)…

-Trying LCHF and not responding well

-Using Inside tracker for blood testing and to refine diet

-What did Mike learn about his health from the test that you didn’t know before? Any deficiencies?

-What tweaks did he make nutritionally?

“I think the coolest thing about the blood testing is it can show you where you need to focus your eating and help you say choose carrots over spinach or sweet potatoes over brown rice. I like that. I feel like I eat pretty well but the testing can determine exactly how well and then I can tweak stuff.”

-How did Mike find his sweet spot mpw? Also in terms of not doing too little.

-50k WR. i’m a big believer that once the bar is set, it becomes easier to break. did that help you finally get that sub3hr 50k after several attempts?

-On racing and running exclusively in Hokas!

-Works full time at an international ship brokerage, coach and consult for races and events

-Sponsored professional athlete and compete over 40 times a year.

-ON raising a child who suffers from epilepsy

Michael was the 3rd place finisher at the Badwater Ultra Marathon (135 Miles in Death Valley, CA in July with average temps at 121 degrees)  in 2011.