June 15, 2015
This episode is brought to you by Generation UCAN Super Starch. Ditch the sugar-based fuel. Take your training, racing and health to the next level and optimize your performance. 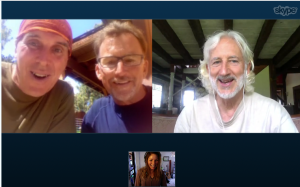 On this show we not only talk to Chris but also Dr. Phil Maffetone and Hal Walter for a show that’s an instant classic. You’ll learn how guys like Phil and Hal have greatly inspired Chris, and how all three of them are living a primal and functional life – in the myriad ways they view fitness.

Topics discussed in this show:

– How Chris was “late to the party” and went on to find Hal and Phil,

– Functional fitness as a way of life (from running to parkour),

– Exploring the physical, mental and nutritional tactics of humans throughout history.

– How do war stories from WWII and soldiers on the Greek island of Crete tie in with endurance sports and athletics?

-Who is the Cretan Runner? WWII’s “The Clown” – a runner who carried war messages some 50 miles back and forth between mountain hideouts.

– How did setting up a practice rather than going into business effect Dr. Phil’s career?

– The “Natural Movement” was the name Georges Hébert gave to the physical fitness method he created in the early 1900s. His credo was: “Be fit to be useful.”

– Are people getting away from specific distances and races and get more focussed on higher health and movement goals? Is this the “golden age” of fitness?

– Being competitive vs. acquiring skills

– How did Phil once gauge how fit he was? (Hint: it involved hunting)

– Chris’ take on diet and fat as fuel, and how he was inspired by Phil

– “A diabetic isn’t going to listen to you,” Phil said to Chris. Why?

– How food, drink and sport nutrition manufacturers killed our ability to burn fat for fuel, and how we can get it back!

– How every animal on earth knows how to eat properly except for humans – how do we get back to that?

– The art of Pack Burro Racing from one of the world’s best, Hal Walter. And more on the relationship between man and animal in nature and endurance events.

– What else will we learn in Chris’ new book? Chris share stories of some Natural Born Heroes,