Pt. 2 – Dr. Jeff Volek and Zach Bitter: Inside the FASTER Study and Low-Carb Fueling for Athletes

March 12, 2015
This series is brought to you by VESPA, Nature’s Catalyst for Optimizing Fat Metabolism (OFM) and the cutting-edge sports nutrition for fat-adaptation. Give it a try! As a special offer for listening to this Endurance Planet series you can enjoy 15% off your purchase when you use the code “ep2015” at enduranceplanet.com/vespa and start your road to fat adaptation now!

Listen to Part 1
be sure to tune into part one of the series before you continue on to part 2. 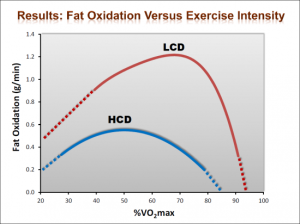 What you get in Part 2 of the FASTER Study and Low-Carb Fueling Series:

Defining the FASTER study & the Results

“We’re charting new territories here in terms of what are the limits in how much fat humans can oxidize.” – Dr. Jeff Volek

Previously fat oxidation rates were seen at 1g per minute prior; seen in this study. But the FASTER study showed up to 1.8g per minutes of fat oxidation – first to be documented in a lab setting!