The Ten Commandments of Endurance

There is, perhaps, no one more qualified to speak on the subject of endurance than 58-year-old Marshall Ulrich of Idaho Springs, Colorado. Outside Magazine once dubbed him the “Endurance King”–and for good reason. In 2008 he ran 3,063 miles across America in just 52-and-a-half days. That’s equal to 117 marathons. He has won the Badwater Ultramarathon. four times. And he has climbed the tallest summit on each continent–a feat known as The Seven Summits.

A motivational speaker, Ulrich recalls being asked to address a group of Navy Seals in 2007.

“And I said to myself, ‘What can I give these guys?’ You know, for instance, they throw them out in the water and they’re struggling for their lives…’what can they think about? What can I give them to help them?’ The same thing holds true for our lives. What can we have in hand that will help us deal with things?”

That’s when Ulrich wrote his Ten Commandments of Endurance, which he shares with Endurance Planet.

10. Expect a journey and a battle–

“Life is not always simple. Don’t think that it’s just going to be smooth and not a rocky road. Accept that in your mind and then you can deal with things.”

9. Focus on the present and set intermediate goals—-

“Don’t get too far ahead of yourself. Just stay in the present. If you’ve got some sort of problem…just deal with that. Take a deep breath and solve that one problem and then you can go on to others.”

8. Don’t dwell on the negative–

“I think it helps to step outside of ourselves and not live in our own space or our own head too much. Look at what’s happening out there and focus on even problems of the world or other people. It kind of takes that focus from ourselves.”

“If you’ve got an injury, say you’ve twisted an ankle and you want to keep going–providing you’re not doing damage to yourself–take that focus off that ankle. You can keep going as long as you don’t get locked into thinking about it continuously. You can transcend that physical aspect.”

“Just accept it for what it is and take it one step at a time.”

5. Have confidence that you will succeed—

Recall experiences, “where you’ve had success in the past. It will give you confidence to go beyond what you normally thought you could.”

4. Know that there will be an end—

“There will be an end and we can go on to more fertile soil.”

“That’s the human condition. We’re all going to suffer on one level or another.”

“If you’re running and you need to walk a little bit. That’s okay. Know that you have weaknesses just like anybody else.”

1. Quitting is not an option—

To learn more about Marshall Ulrich, visit Dreams in Action. 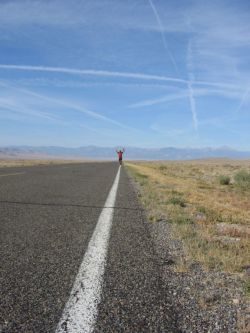