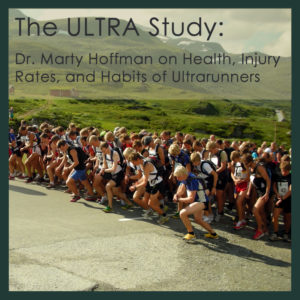 In this exclusive podcast we speak with Dr. Marty Hoffman and dive into the most extensive research to date on ultrarunners. Marty is the key researcher of The ULTRA Study, a longitudinal study on more than 1,200 ultrarunners that began in 2011 and will continue for years to come to find out what really happens when we run, a lot.

The most recent information was released in 2014 telling us so far some fascinating habits of ultrarunners which we discuss in detail on this show:

The Purpose
This study examines the prevalence of chronic diseases, health-care utilization, and risk factors for exercise-related injuries among ultramarathon runners.

No prior study has examined a large group of ultramarathon runners to assess prevalence of chronic medical conditions and how these individuals make use of the medical system.

This population is NOT using medical system as much as the general population.

How do ultrarunners fare vs average population when it comes to missing work or school due to illness or injury (hint: runners are seemingly more willing to tough it out and show up!)

Compared with the general population, ultramarathon runners appear healthier and report fewer missed work or school days due to illness or injury.

Grab a free copy of this article.