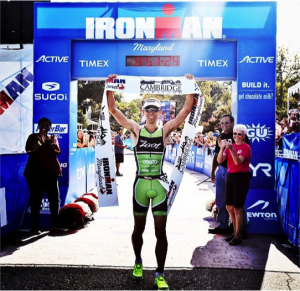 .
His Secrets to Success
–So…. what changed this year for IM Maryland that led to his huge Ironman PR of nearly an hour???
-Got a coach (Tailwind endurance)
-No injuries thanks for strength training/PT
-Power meter
-Adjusted diet and fueling to be more metabolically efficient
.
Race Coverage of IMMD
-Matt’s thoughts
-Awarding the winners
.
His background
-Runner in HS and college
-When and how he got started in triathlon
-Doing it for his brother who died of cancer, and raising money for St. Jude’s
.
Balancing Full-Time Work and Training
-Day job at a hedge fund company
-A Day in the Life
-Morning workouts
-Wife and dogs
.
Diet and Metabolic Efficiency for Success
-This year how he became extremely fat-adapted and the benefits he saw
-Raced on less than 100cal an hour at IMMD!!!!
-Fuels using primarily Generation UCAN SuperStarch – find out more at enduranceplanet.com/UCAN
-Works with Nicci Schock of ElevateByNicci
-His pre race dinner and breakfast
-Macronutrients in his regular diet
.
Racing
-Will we see Matt going pro???
-Half-Ironman goals
-Plans for the rest of 2014 and the 2015 season leading into Kona
-Goals for the IM World Championships next year
-Team Zoot member
Click here to download audio.